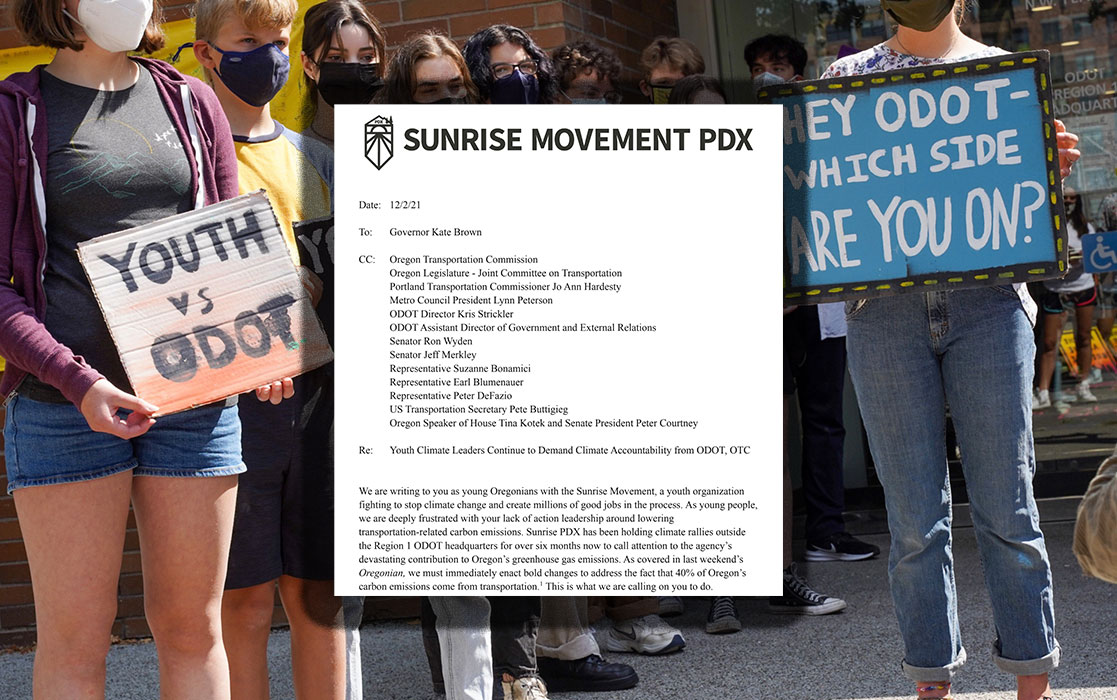 Saying they’re “deeply pissed off” by the dearth of progress from Oregon Governor Kate Brown, youth local weather activists with Dawn Motion PDX have boosted and tweaked their calls for in a brand new letter that was additionally copied to Oregon’s congressional delegation, US Division of Transportation Secretary Pete Buttigieg, and different elected officers.

“Dawn PDX has been holding local weather rallies outdoors the Area 1 Oregon Division of Transportation (ODOT) headquarters for over six months now to name consideration to the company’s devastating contribution to Oregon’s greenhouse fuel emissions,” states the letter, “If you started serving Oregon as governor in 2015, you promised to combat for the youth, for our futures. And but, 6 years later, you haven’t stored that promise. We’ve despatched you this letter in hopes that you simply lastly will.”

Amongst their calls for first unveiled in April, these activists need: a full Environmental Affect Assertion (EIS) for the proposed Rose Quarter
freeway enlargement; a direct moratorium on all freeway expansions inside Portland’s City
Progress Boundary; and a youth local weather advocate to be appointed to the Oregon Transportation Fee, the five-member panel that oversees ODOT.

Their hopes for a youth local weather member of the OTC had been dashed final month when the state introduced the selectiono of UO Regulation Faculty Dean Marcilynn A. Burke. Now the activists say Brown ought to increase the fee to seven members, and add one particular person beneath 35 and one other who doesn’t or can’t personal a automobile or drive — a situation they are saying would symbolize an estimated 1 in 3 Oregonians.

Now the activists have turned their sights to the upcoming inflow of federal funding from the Biden administration. They’ve a brand new demand associated to that:

“… each greenback from the Infrastructure Funding and Jobs Act and the Construct Again Higher laws (if handed) go in the direction of transportation initiatives that can cut back automobile miles traveled and carbon emissions by rising funding in transit, passenger rail, biking and strolling.”

Jonathan Maus is BikePortland’s editor, writer and founder. Contact him at @jonathan_maus on Twitter, by way of e mail at maus.jonathan@gmail.com, or cellphone/textual content at 503-706-8804. Additionally, in the event you learn and admire this web site, Jonathan hopes you’ll turn into a supporter.