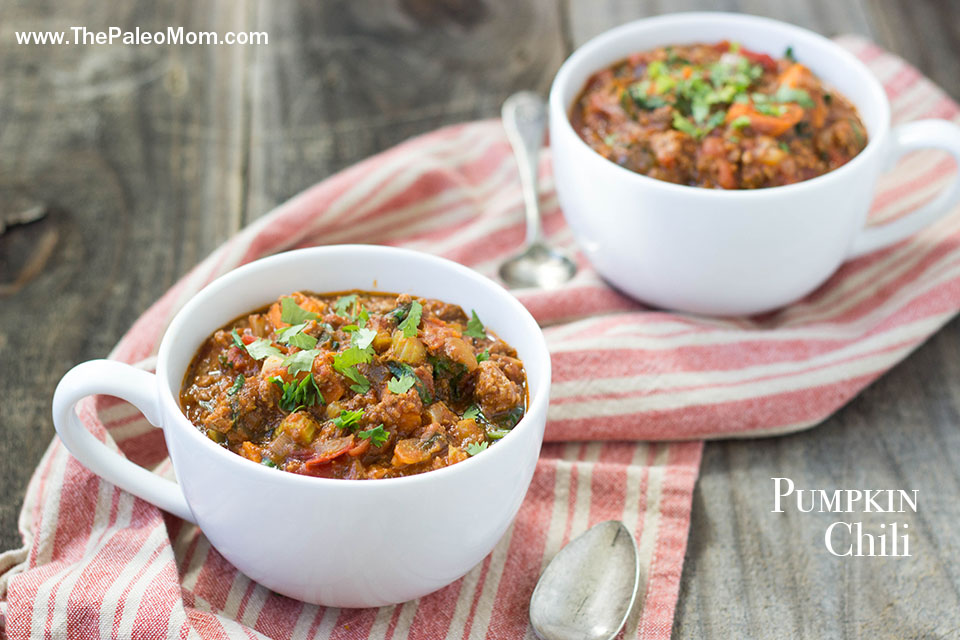 Once I reduce into our huge pumpkin to make a jack-o-lantern this 12 months, the pumpkin smelled so good!  It’s a humorous factor about consuming very strictly Paleo:  meals that used to odor nice don’t anymore and meals that was once sorta abnormal odor FANTASTIC!  I resolved to eat that pumpkin along with the pie pumpkins I had already bought.

I needed to strive one thing savory with my new abundance of contemporary pumpkin and I remembered a recipe posted on www.robbwolf.com for pumpkin chili.  The recipe itself wasn’t that inspiring to me, however the thought was!  One of many meals that I used to be very unhappy to see go once I absolutely adopted Paleolithic diet was chili (particularly because the climate will get cooler!).  So my problem was to create a chili, stuffed with texture and with a taste much like my previous tried and true recipe.  That is what I created.  It’s a very flavorful, barely candy chili that’s barely paying homage to a curry dish and tastes nice by itself (even my husband didn’t attain for the grated cheese and bitter cream!).  It’s packed stuffed with nutrient wealthy, low carbohydrate veggies.

20 Meal Plans for quite a lot of targets

I LOVE this e-book. The science is superior. I’ve realized a ton with out feeling overwhelmed. The paleo rules simply takes my understanding to the subsequent stage!!!

1.    Toss pumpkin and candy potato with oil.  Unfold on baking sheet lined with tin foil and bake at 350F for half an hour or till smooth and beginning to brown.  Activate broiler to get a bit browner with some crisp bits (roughly 6-7 minutes).
2.    In the meantime, brown turkey and beef with garlic, onion, celery and bay leaves in giant pot at medium-high warmth.  Stir solely often to not break up the meat into too small of items.
3.    When meat is browned, add chili, cumin, nutmeg, cinnamon, and cocoa.  Stir and prepare dinner till aromatic, about 3-4 minutes.
4.    Add tomatoes, tomato paste, pumpkin puree and salt.  Carry to a simmer after which cut back to low-medium warmth.  Simmer quarter-hour, till celery is smooth, stirring often.
5.    Add basil, oregano, cilantro and chopped spinach.  Lastly add pumpkin and candy potato.  Stir to include and serve!