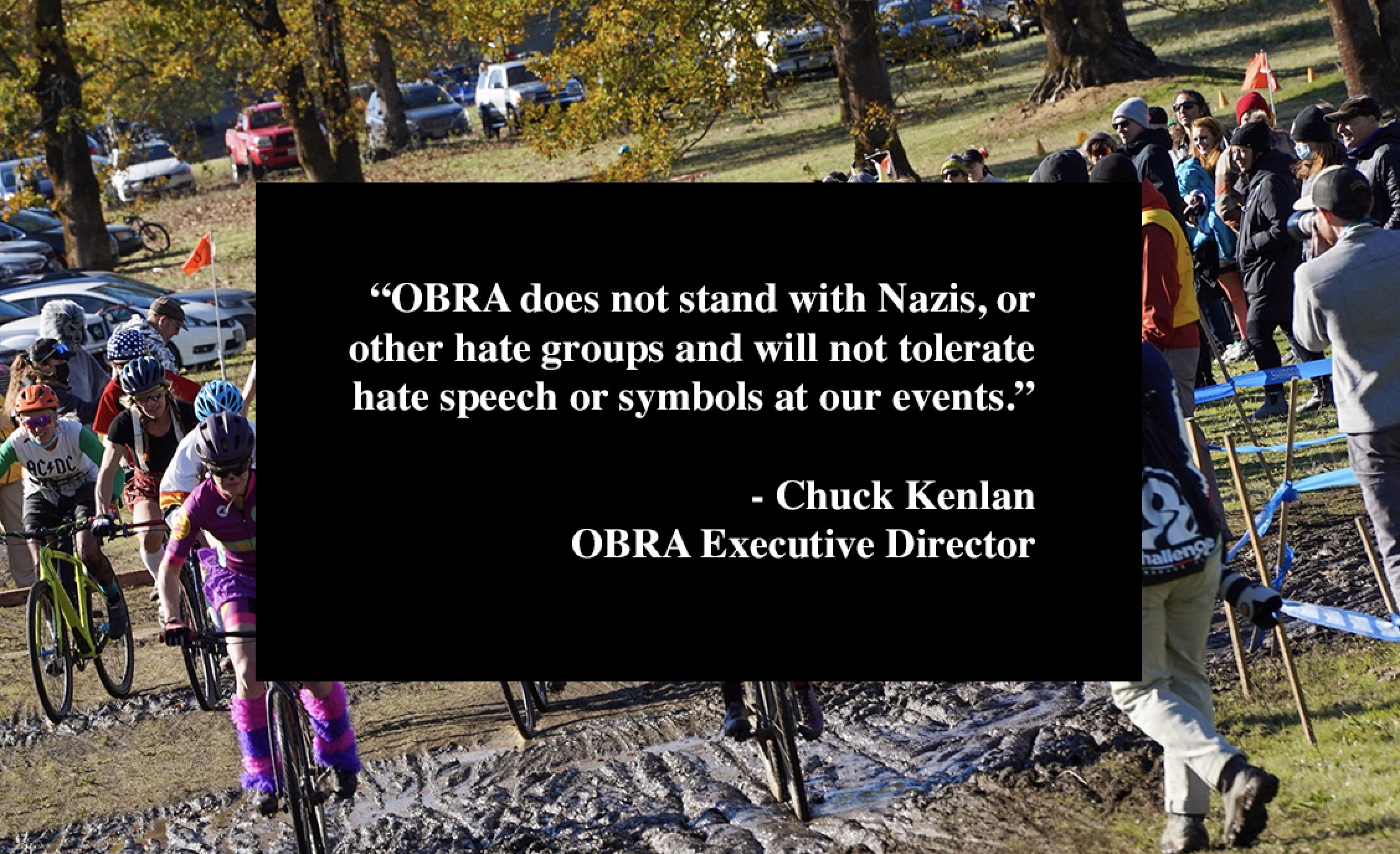 The Oregon Bicycle Racing Affiliation (OBRA), a statewide nonprofit that sanctions bicycle races, took disciplinary motion Wednesday in opposition to a rider who competed at a cyclocross occasion on Sunday at Rainier Excessive College.

In accordance studies from sources who’ve reached out to BikePortland, a rider within the Class 2/3 area of the Cyclocross Campaign occasion wore a shirt and hat emblazoned with messages associated to conspiracy theories in regards to the vaccine, authorities overreach, the Holocaust, and so forth. In a photograph from Instagram posted by @bolognamologna, a swastika will be clearly seen.

“At this race, somebody was allowed to race whereas displaying two hand drawn swastikas on the again of their shirt, in addition to different types of false info,” the poster wrote. “@oregonbikeracing claims that they wish to present a protected and inclusive setting for all cyclists, particularly these of traditionally marginalized communities. These actions don’t line up with these proposed values.”

One other reader who emailed us about this in the present day stated, “Our racing neighborhood has all the time been a cocoon and protected place we take with no consideration.”

One one who contacted us stated they noticed the shirt. “He’s been at a number of [Cylcocross] Campaign races with the identical bizarre outfits that say nonsense about vaccines and QAnon and stuff.” We’ve additionally heard that the identical rider wore a shirt that stated “Kill Fauci” on the Cyclocross Campaign race two weekends in the past in Cascade Locks.

The rider (whose identify I’m not going to share right here at the moment) is a long-time OBRA member and racer with outcomes going again so far as 2001.

“I’m writing to you this night to debate an incident that came about at an OBRA race final weekend. An OBRA member and racer drew a logo of hate on the shirt worn in the course of the race. Though this got here to us with out first-hand information or proof, we lastly bought affirmation of it this morning. I wish to thank all the OBRA neighborhood that alerted us to this and for the people who captured photographs that confirmed the motion. The race organizers and officers attempt their finest however can’t all the time spot issues like this. This motion was a transparent violation of OBRA’s Code of Conduct and disciplinary motion was taken:

OBRA, the Cyclocross Campaign, and all of our race promoters strongly consider that our occasions should be locations the place each particular person feels protected and accepted. OBRA doesn’t stand with Nazis, or different hate teams and won’t tolerate hate speech or symbols at our occasions.

OBRA isn’t excellent. The group is made up of a devoted volunteer board of administrators and a hard-working, part-time workers. We’re additionally made up of you, our neighborhood that expects the very best of us. OBRA lets you have a say in how we’re ruled by electing our board of administrators and creating guidelines to assist govern racing and the administration of the group. We’re always striving to be higher and create an inclusive setting the place each particular person that wishes to race a motorbike feels protected and accepted.”

I’ve requested Kenlan for extra particulars on the motion taken and can replace this submit when/if we hear again.

UPDATE, 1:30 pm: Kenlan says, “At this level we’re protecting this inside. We’re working with the board, workers and DEI [Diversity, Equity, and Inclusion] committee to come back to a decision round this very severe violation of the OBRA Code of Conduct.”

Jonathan Maus is BikePortland’s editor, writer and founder. Contact him at @jonathan_maus on Twitter or by way of e-mail at maus.jonathan@gmail.com or telephone at 503-706-8804 (texts okay).